According to Gartner, RPA is the fastest-growing segment of the enterprise software market and it is estimated that 85% of large and very large organisations will deploy some form of RPA. This prediction notwithstanding, enterprises are struggling to scale their RPA transformation projects out of the pilot phase.

The 2019 Deloitte survey of executives identified process fragmentation as the biggest single barrier to scaling RPA, with 32% of respondents identifying process fragmentation in systems and solutions was their largest barrier to scaling RPA efforts. A lack of IT readiness and a clear vision from leadership were also identified as major challenges to achieving scale. 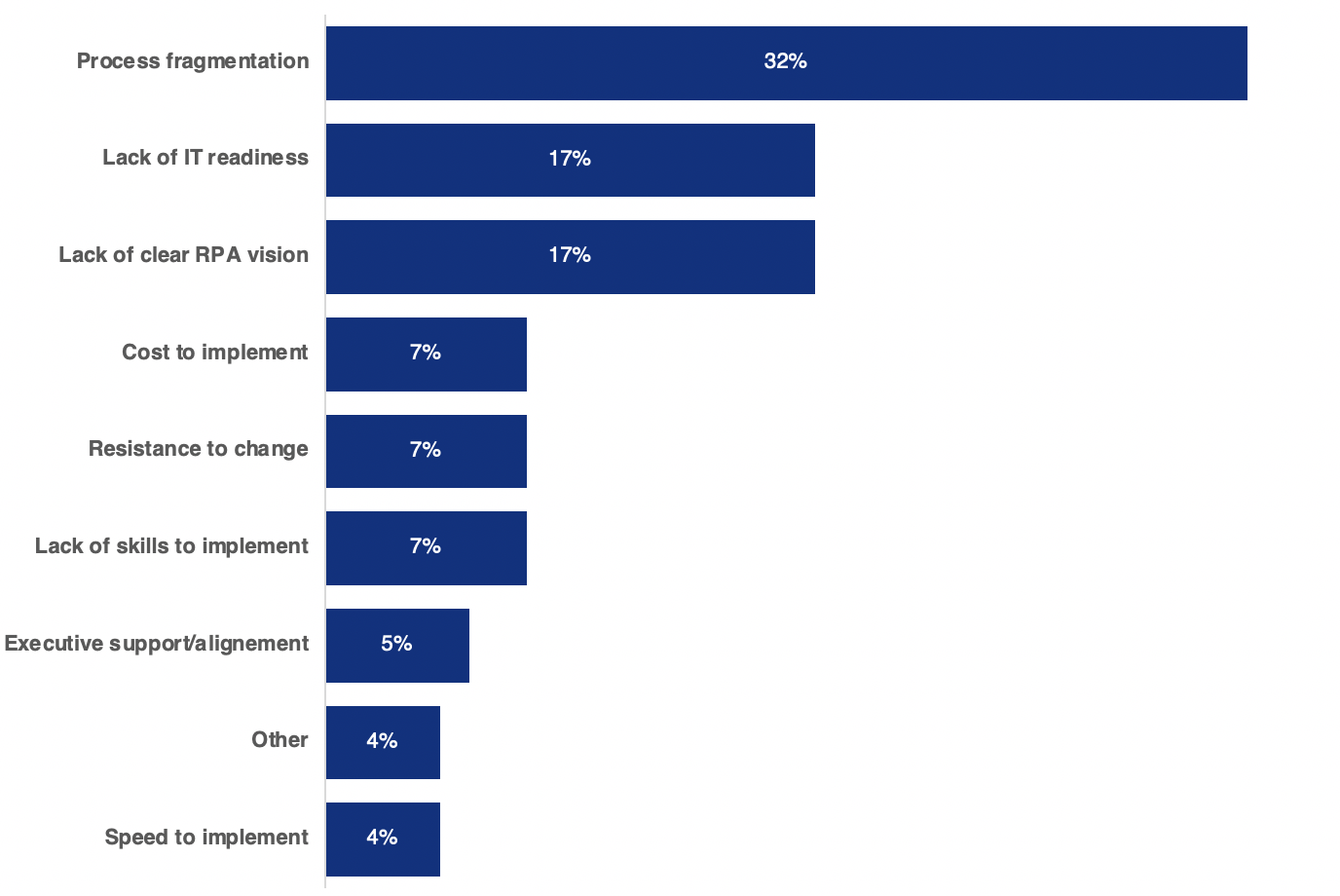 Process fragmentation is typically caused by multiple process and system variations and results in increased complexity and reduced leverage from individual automations. Process fragmentation is manifested daily in how processes are performed across an organisation. Processes are not typically documented at this granular level, and attempts to do so usually uncover a wide range of ‘unknown unknowns’. To overcome this primary barrier, the following considerations should be made:

Focus on getting the simple parts of a process automated first. Once you start small with known processes, then adapting the automation progressively to account for the exceptions and 'unknown unknowns' as they are discovered is much easier.

Be process and value-led#

Enterprises typically have to source several automation offerings to achieve end to end automation. This usually involves having separate software systems to build automation workflows, host the automation, manage an exceptions and include any cognitive capabilities. An additional layer for BI and reporting is often also added to satisfy management. Finding a software vender that combines all these offerings in a single platform will help streamline the migration and reduce fragmentation.

As tempting as it might be to focus on simple one-off task automations only, doing so is unlikely to release significant benefits. Take a portfolio approach, mixing task automations with wider ‘use cases’ and, where possible, looking at end-to-end processes to systematically identify all the automations (and process enhancements) required.

Cognitive solutions for relatively simple activities like email triage or classification are highly effective, mature rapidly and do not take long to train. Combining RPA and cognitive automation technologies can dramatically increase return on investment.

At Unmand, we solve this process fragmentation for you by oferring a single unified automation platform. Users can create, deploy and monitor all their automation projects in one place. Unlike other solutions, you do not need multiple product subscriptions or complicated and drawn out procurement processes to start scaling any number of workflows across your organsation.